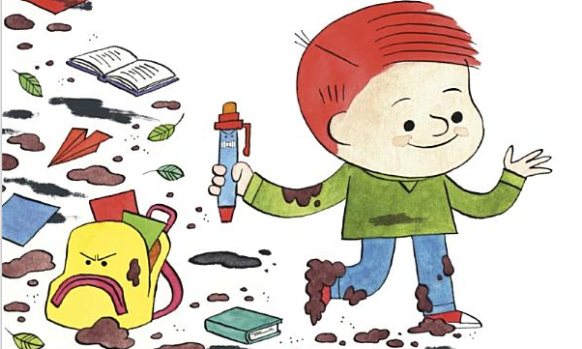 It's 7:45am on a Tuesday morning; I've just gotten home from Shachris. As I walk through the front door, I hear a crash, then a scream, and then crying. Looking for the source of the commotion, I see that two of my kids are busy eating breakfast. Except that one of the is on the floor, quite literally crying over their spilled milk (and cheerios). As I make my way into the kitchen, I ask both kids to help clean up. The one on the floor begins to collect their cheerios. The other child, however, is standing, staring, defiantly declaring “Abba! It's not my fault!”

“No one said it was your fault.” I explain. “But that doesn't mean we don't all have a responsibility to help clean up. After all, we all want to live in a clean home...”

I've been working hard on instilling this idea in my children, in my students and in myself for a number of years. Recognizing this truth has been a major factor in my own personal growth, weight loss and health journey. It took a long time for me to finally understand that while it might not be my fault (or anyone's) that I grew up with unhealthy habits, the responsibility to change them is still mine, and mine alone. Because, ultimately, the exercises of assigning blame and determining who is really at fault, do very little to solve the problem at hand.

These are heavy words, but Chazal are making a clear point: Even though our generation is not at fault for the destruction of the Beis HaMikdash, we are most certainly responsible for ensuring that it is rebuilt.

The Yismach Moshe (כי תצא יב) spells out this responsibility: If we do Teshuva, fixed out actions and affect, the Beis HaMikdash will be rebuilt, and if we don't, then it won't. That's what's at stake. That is what is possible. But developing that mindset from the despair Tisha B'Av is difficult.

Reb Tzadok HaKohen of Lublin suggests that seven days after Tisha B'av is the day that we celebrate taking this responsibility. He writes that this day – Tu B'av – is designated to the day when we will one day rebuild the Mikdash.

But when the Talmud describes the celebrations of Tu B'av, however, the explanations seem to be someone confusing. There are six reasons given, but it is the final one which we will focus on, since the Izbitzer writes this reason is the one which encompasses them all:

To understand this, we need understand the dichotomy of axe anatomy, as the Talmud (סנהדרין לט ב) explains: מיניה וביה אבא ניזיל ביה נרגא. “From the forest itself comes the handle for the axe.”

When Hashem created steel, the trees began to tremble. Said the steel to them: “So long as none of you serve as my handle, no tree will be harmed.”

The Maharal (חדושי אגדות סנהדרין לט) explains what Chazal are teaching us in these Midrashim:

כי רגיל הוא שפורענות יבא על האדם מצד עצמו Most of the calamities that happen to us, also happen through us.

That is to say, the person most likely to cause damage to us, is ourselves. It might not be the wood's fault that other trees are cut down, but allowing oneself to become a handle is evading essential responsibility.

In almost every situation in our lives, we are both the subject, the actor, as well as the object, the recipient. Which means that there are only two ways to live life. Either as victims of our circumstance, or as captains of our ship.

This decision effects every part of our lives, from our careers, to raising our children. From marriage to davening. From success to failure. This decision effects the way that we look at everything – is this a failure, a setback, or a trend? Is this challenge a speed bump or a road block?

Optimism doesn’t mean everything is great, it means we can respond to everything with greatness.

So how should a Jew respond to the aftermath of Tisha B'av, where the night is growing longer, and the world is growing colder? Where we can no longer dry out the wood for the mizbeach?

But there is another way. We could look at the lengthening of the night, and the coldness of the world, and say “Wow! This is a great time to dive deeper into Talmud Torah. This isn't an obstacle, it's an opportunity.”

The celebration of breaking the axes was a display of abandoning the self destructiveness that led us to the Churban in the first place. It was a bold declaration that we won't the cause of our own demise. It doesn't matter whose fault it is, the milk and cheerios need to be cleaned up, so we might as well get a mop.

This Shabbos, Moshe Rabbeinu teaches us (4:29):

But from there you will seek Hashem you God; and you will find Him...

The Baal Shem would teach: “There” means that wherever you are is the place from which you should seek Hashem. In essence, be a captain of your ship.

This perspective of taking responsibility was a pillar of the Lubavitcher Rebbe's life, and indeed, many of his talmidim and chassidim. Lord Rabbi Sacks tells the story:

“Many years ago, I came to the Rebbe’s residence in New York, and eventually the moment came when I was ushered into the Rebbe’s study. I asked him all my intellectual, philosophical questions; he gave intellectual, philosophical answers, and then he did what no one else had done. He did a role reversal, he started asking me questions. How many Jewish students are in Cambridge? How many get involved in Jewish life? What are you doing to bring other people in? I’d come to ask a few simple questions, and all of a sudden he was challenging me. So I replied: “In the situation in which I find myself…”

Hashem should help us to break the axes of self destruction. To see the opportunities and not the obstacles. To be captains and not victims. To, Be'ezras Hashem, bring ourselves, our families and each other into a world of Geulah, to build the Mikdash, speedily in our generation.