Step into the Sukkah: It's Bigger on the Inside 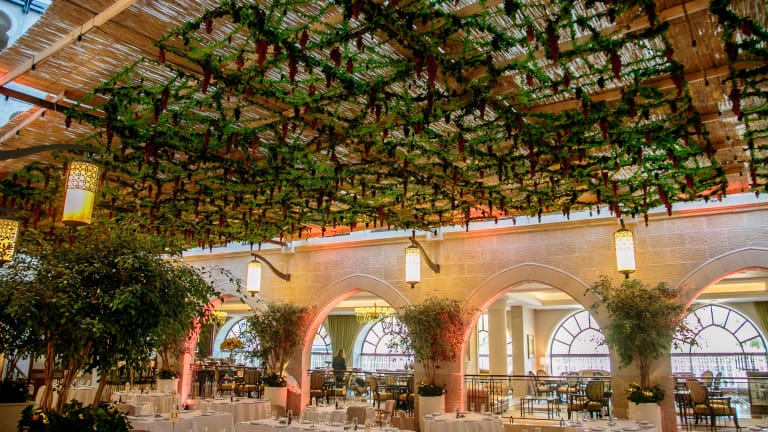 A Texan was visiting Israel and when he was driving through the Negev, he began to feel thirsty. He looked for a place to get a drink but he didn’t find anything open. Just then, he noticed a house further along the road, so he stopped at it.

“Can you give me a drink of water?” asked the Texan.

“Of course,” said the Israeli, and invited the Texan into his house.

“I raise vegetables and have a few chickens,” said the Israeli.

“Well,” said the Israeli, “out front it’s fifty meters, as you can see, and in the back we have close to a hundred meters of property. And what about your place?”

“Well,” says the Texan, “on my ranch, I can have breakfast and then get into my car and drive all day—and I don’t reach the end of my property until dinnertime.”

“Really?” replied the Israeli. “I once had a car like that.”

Sometimes, we forget how big we can become. In many ways, our Sukkos is a pale comparison to the Sukkos of an Israeli farmer today, and it is even smaller when compared with the Sukkos we used to celebrate when the Beis HaMikdash stood. This is especially true this year, the year following Shmitta, when the entirety of Klal Yisrael would gather for Hakhel.

The Torah describes this Chag as חג האסיף – the festival of ingathering. It's a festival to celebrate the harvest, store it away and get ready for the winter months to come.

Sukkos is the end of an agricultural cycle that began in the spring with Pesach, and concludes now. But Sukkos is not simply the end of the Shalosh Regalim cycle, it is also the conclusion of the Yamim Noraim cycle that began in Elul and continues for the next week. (Rav Hutner's Pachad Yitzchak has two volumes dedicated to Sukkos – one related to the Yamim Noraim, and the other to the Shalosh Regalim.)

Thus the question arrises, what, if anything do these two cycles have in common such that they conclude in identical ways?

The Gift of Tahara

But there are very few mitzvos that a person does with their entire body. There are precious few opportunities that consume us entirely. And the transition from Yom Kippur to Sukkos represents two understandings of the entire person.

Yom Kippur, more than any other days is the Mikvah; literally and figuratively. We enter the mikvah of Yom Kippur. There Hashem purifies us, cleans us, forgives us.

But stepping into the mikvah demands that we leave everything else outside. We cannot enter into the mikvah with even an item of clothing. Thus Yom Kippur strips us of our earthly ties – food, drink and comfort. In exchange for renewal and atonement, we must abandon all connection to the physical world. We throw ourselves completely at Hashem's mercy. There is no human involvement here at all. According to the opinion of Rebbe Yehuda HaNasi, Yom Kippur atones (at least for some sins) even without teshuva!

The Beis Yaakov of Izhbitz notes that a mikvah demands that no human involvement is present. The waters we immense in must come from rain, or a natural spring; directly from Hashem.

But the Sukkah is different. It too demands a total and complete immersion. But to the Sukkah we bring everything. The Halacha demands that we bring not just ourselves, but our finest china, nicest clothes, and most delicious food. The Sukkah represents the Jew at our most expansive, most inclusive. There is nothing, no part of who we are that cannot be elevated by being in the Sukkah.

As a young child at his father's farbrengens, the Frierdiker Rebbe heard the his father saying: The Baal Shem Tov said that a sukkah and a mikveh have a correlation, they both refine the person and draw down new light. The Maggid said that while a mikveh purifies the person, the sukkah elevates him.

The Mikvah of Yom Kippur provides Tahara, purity. It gives us a fresh start, an undo-button on the blemishes of our past. In the highest moments of Yom Kippur, we divest from the world and enter into the highest levels of Kedusha, the Kodesh Kodashim. But the Sukkah does much more, it allows us to bring our entire world into Kedusha.

If Yom Kippur is the elevation of the individual thought the gifts and grace of Hashem, then on Sukkos, we become the vehicle through which the entire world is elevated. In essence, Sukkos is the celebration of the Jew as a partner with the Ribono Shel Olam.

The Simcha of Sukkos

Examples of this abound throughout the Chag. On Sukkos, the Arba Minim must belong to you. (Indeed, the paradigm of a מצוה הבאה בעבירה is לולב הגזול.) On Sukkos we bring all 70 nations into the service of Hashem, offering a Korban for each. On Sukkos, the decorations that we hang in the Sukkah become Kodesh.

On Sukkos, we draw water for the Nissuch HaMayim. The Beis Yaakov once again notes, that the celebration is not on the pouring of the water, but the drawing. The same amount of drawn water that would invalidate a mikvah – 3 lugin – is what we are now obligated to draw for the mizbeach.

We draw inspiration from Torah, and use that to connect to Hashem in Tefillah.

It once happened on a hot summer day in July 1866 that the fourth Rebbe of Lubavitch, Rav Shmuel, known as the Rebbe Maharash, was sitting and learning in a shaded trellis in the garden adjacent to his home. His two sons, five-year-old Sholom DovBer, who would become the fifth Rebbe of Lubavitch, the Rebbe Rashab, and six-year-old Zalman Aharon, who would become the tzaddik known as the Raza, were playing nearby. The two of them, little Sholom Dov Ber and Zalman Aharon, were having a debate regarding the difference between a Jew and a non-Jew.

At the end of the debate, the boys agreed that the difference was that a Jew learns and davens and a non-Jew does not learn or daven. Their sister told the Rebbe Maharash about the debate, and the Rebbe called the boys over. He then asked them what differentiates a Jew and a non-Jew when the Jew is not learning or davening. They could not answer the question. So he asked them to call Ivan the coachman, who was not Jewish, to come to the Rebbe.

Ivan, who had grown up among Jewish people, spoke Yiddish perfectly. When he arrived, the Rebbe Rashab asked him, “Did you eat today?” “Yes.” “Did you eat well?” “Thank G-d, Yes.” “And why do you eat?,” the Rebbe asked. “So that I may live.” “And why do you want to live?” “To see my wife and kids, to have a little vodka and have a bite to eat at the end of the day,” replied Ivan. “Thank you,” the Rebbe said, “you may go.”

The Rebbe then asked the boys to summon Bentzion, a Jewish servant in the Rebbe’s home, to join them in the trellis. Bentzion was a very simple Jew and could barely read Hebrew and mispronounced almost every word. The Rebbe asked Bentzion, “Did you eat today?” “Yes,” Bentzion replied. “Did you eat well?” Bentzion answered, “What does ‘well’ mean? Baruch Hashem, I am full.” The Rebbe then asked him, “And why do you eat?” “So that I may live.” “But,” the Rebbe asked, “why do you want to live?” Bentzion paused for a moment, a tear fell from his eye, he sighed, and then answered, “To be a Jew and do whatever Hashem wants from me.” The Rebbe thanked Bentzion for coming.

Both Jews and non-Jews must eat, drink, sleep, and work. But the only thing which differentiates us is how we answer the last question – “Why do you want to live?” Ivan can answer, with a clean conscience, that they live for life, liberty and the pursuit of happiness.

But if we live within a Sukkah together with Hashem we must ask ourselves the last question. And when we do, we must not be satisfied until we can answer that we want the world to look a little different. And that we have a real creative role to play in it.

Rav Hutner famously wrote to a Talmid in Medical School:

The key to Kedusha is inviting Hashem into our daily, mundane lives, and bringing every element of life under the umbrella of Kedusha. The agricultural and economic cycles and worlds must be part of the world of Teshuva. This is the great gift that Klal Yisrael gives to the humanity: The confidence to live broad, unified lives. That's the great simcha of this chag. Hashem should help us to achieve it in our lives as well.